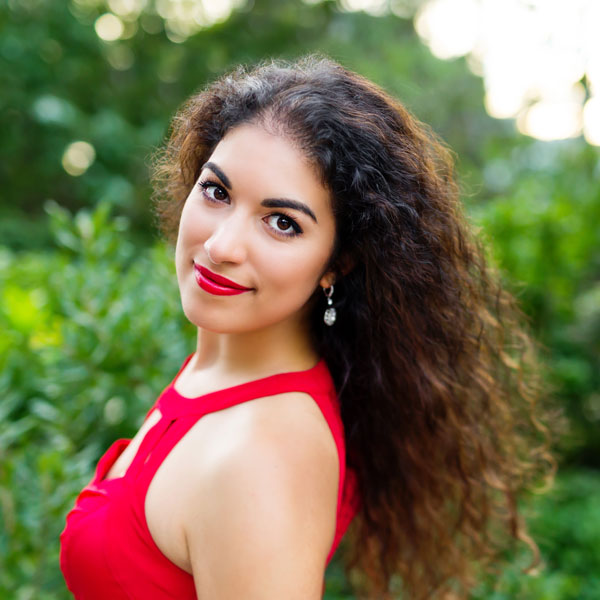 Puerto Rican-American soprano Sophia Burgos is fast emerging internationally as a young talent of outstanding intelligence, musicality and stage presence. Her repertoire ranges from concert repertoire and chamber music to contemporary opera, collaborating with artists in the United States and Europe.

Recent appearances include her European operatic debut, premiering the title role of Maria Republica by François Paris with Nantes-Angers Opera, the title role of Jennie in the New York premiere of Oliver Knussen’s Higglety Pigglety Pop! with the Bard College Conservatory and her Carnegie Hall debut performing Correspondances by Henri Dutilleux with the American Symphony Orchestra, Lily Briscoe in the world premiere of To The Lighthouse by Zesses Seglias at the Bregenzer Festspiele, Claude Vivier’s Lonely Child with Teodor Currentzis and the Mahler Chamber Orchestra at the Prinzregententheater in Munich and the Elbphilharmonie Hamburg, Emily Dickinson songs by Robin de Raaf with Het Gelders Orkest and Antonello Manacorda (released on CD by Challenge Records) and the lead role Enoa in Andrew Norman’s To the Moon and back, with the Berlin Philharmoniker and the London Symphony Orchestra, both conducted by Sir Simon Rattle.

Last season, Ms Burgos returned to the Elbphilharmonie for Quatre Chants Pour Franchir Le Seul by Gérard Grisey, performed Bernstein’s Songfest with the BBC Symphony Orchestra and the MDR Sinfonieorchester, returned to the Bregenzer Festspiele for Britten’s Les Illuminations and gave her debut at the Festival d’Aix-en-Provence as Belinda in Dido and Aeneas.

Highlights in 2018/19 include her role debut as Ann Trulove/The Rake’s Progress with the London Philharmonic Orchestra and Vladimir Jurowski, a CD recording and concert with the Basel Symphony Orchestra and Ivor Bolton in works by Berio and de Falla, her house debut at De Nationale Oper Amsterdam as Jano/Jenufa, Saint-Saens’ Le Martyre de Saint Sébastien with the Tonhalle Orchester Zurich under Matthias Pintscher, Beat Furrer’s Schnee-Szenen (premiere of concert version) with the Symphonieorchester des Bayerischen Rundfunks under Peter Rundel and Fox/The Cunning Little Vixen with the London Symphony Orchestra and Sir Simon Rattle in London and Paris.

A champion of new works, Ms. Burgos has collaborated with esteemed composers such as Andre Previn, premiering his Two Lyric Songs: The Waking as part of the 75th year anniversary of the Tanglewood Music Center, and was recognized in her performance of George Crumb’s Ancient Voices of Children by the London Times for “making light of the vocal part’s virtuoso technical demands… with an always beautiful sound.” Ms. Burgos also developed operatic roles such as Iphigenia in Osvaldo Golijov’s latest opera, Iphigenia in Aulis, with excerpts workshopped at the Metropolitan Opera. In 2014 Ms. Burgos appeared at the Lucerne Festival Academy as a soloist in Luciano Berio’s Coro, conducted by Sir Simon Rattle, and was selected for masterclasses and private lessons with Barbara Hannigan. She performed as soloist in Schoenberg’s String Quartet No. 2 and Matthias Pintscher’s Twilight Song.

Sophia Burgos holds a Bachelor degree from the Eastman School of Music, where she collaborated with Brad Lubman and the Muscia Nova Ensemble performing works such as Akrostichon Wortspiel by Unsuk Chin and Steve Reich’s Tehillim. As winner of the Eastman concerto competition she sang Knoxville Summer of 1915 by Samuel Barber in the Eastman Theatre with the Graduate Chamber Orchestra. Other awards include 3rd prizes in the Friends of Eastman Opera competition and the Jesse Kneisel Lieder Competition, the German Lied Prize at the 2017 Nadia and Lili Boulanger International Voice-Piano Competition in Paris and 2nd Prize and Special Prize at the 2018 ‘Schubert und die Musik der Moderne’ competition in Graz.

She completed her Masters Degree at the Bard College Conservatory’s Graduate Vocal Arts Program where she portrayed the title role of Handel’s Esther, and Gabriel in Haydn’s The Creation with the Bard Conservatory Orchestra and members of the American Symphony Orchestra. Ms Burgos has performed art song and contemporary music recitals throughout New York City and the Hudson Valley. She is proud to receive close mentorship from Dawn Upshaw.

In addition to her career as a singer, Ms. Burgos is passionate about education and outreach through art, holding a degree and certification in Music Education. Originally from Chicago, IL, her earliest musical influences were Spanish folk song and dance, as she and her family are strongly tied to their Puerto Rican heritage. She is currently living in Cologne.