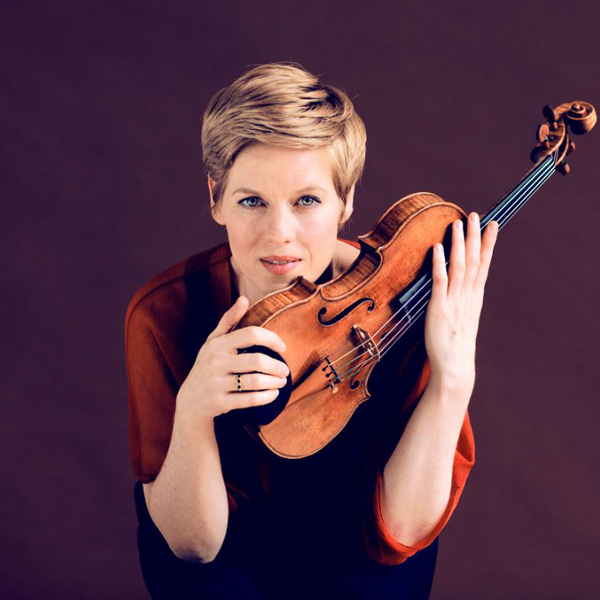 Isabelle Faust captivates her audience with her compelling interpretations. She dives deep into every piece considering the musical historical context, historically appropriate instruments and the greatest possible authenticity according to a contemporary state of knowledge. Thus, she manages to constantly illuminate and passionately perform the repertoire of a wide variety of composers.

Isabelle Faust’s vast artistic curiosity includes all eras and forms of instrumental cooperation. Thus she never considers music as an end in itself but rather advances the piece’s essence in a devoted, subtle and conscientious way. In addition to big symphonic violin concertos this includes for instance Schubert’s octet with historical instruments as well as Stravinsky’s “L’Histoire du Soldat” with Dominique Horwitz or Kurtág’s “Kafka Fragments”. With great commitment she renders an outstanding service to the performance of contemporary music, recent world premieres include works by Péter Eötvös, Brett Dean, Ondřej Adámek and Rune Glerup.

Numerous recordings have been unanimously praised by critics and awarded the Diapason d’or, the Grammophone Award, the Choc de l’année and other prizes. The most recent recordings include Schoenberg’s Violin Concerto under the baton of Daniel Harding and with the Swedish Radio Symphony Orchestra, as well as Beethoven’s Triple Concerto with Alexander Melnikov, Jean-Guihen Queyras, Pablo Heras-Casado and the Freiburger Barockorchester. Isabelle Faust presented further popular recordings among others of the Sonatas and Partitas for violin solo by Johann Sebastian Bach as well as violin concertos by Ludwig van Beethoven and Alban Berg under the direction of Claudio Abbado. She shares a long-standing chamber music partnership with the pianist Alexander Melnikov. Among others, joint recordings with sonatas for piano and violin by Wolfgang Amadeus Mozart, Ludwig van Beethoven and Johannes Brahms have been released.